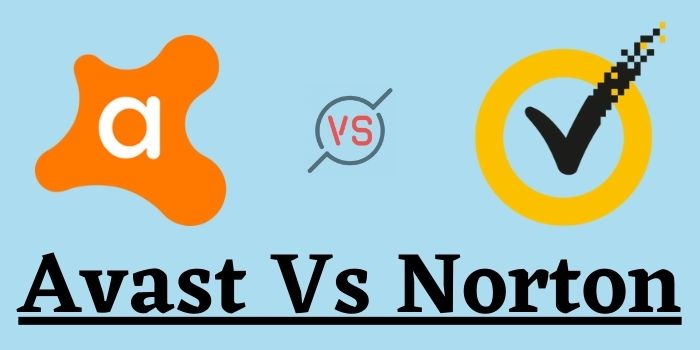 This 21st century brought rapid technological advancements. Due to this, we are slowly etting used to this privilege. But we also need to get used to the knowledge of the potential threats that are also evolving with all the good things.

Cybersecurity Ventures put out data that claims that by 2021, almost $6 trillion worth of damage would occur due to cybercriminal activities. This amount is more than the damage caused by natural disasters per year.

Alarming, isn’t it? Online security is demanded more than ever.

Today we are going to talk about two leading anti-virus software Avast vs Norton 2023. These are considered two of the safest antivirus brands available in the market. Today we will compare these two and see which of them has more capabilities than the other.

Comparison Between Avast Vs Norton

There is a list of factors that we have mentioned below. We will compare Norton vs Avast on the basis of them:

Now, let’s head towards the comparison between Norton and Avast.

Norton started its journey in 1991 with the handholding of Symantec from California. For 30 years now, Norton has been in the market and garnered quite a great reputation. It established itself as a global leader in the industry and has over 50 million users.

Avast, on the other hand, is a brand based in the Czech Republic with a user base of around 435 million. It has been going pretty well until recently when a news coverage showed how Avast was not being honest regarding the data protection of its users.

So, we can see that in terms of the enormity of users, Avast has an edge but, reliability context might not augur well with it.

There are lots of factors that you should look for to find which antivirus provides better protection. These are:

Norton 360 is quite efficient in identifying threats even before they attempt an invasion. It manages a cloud database that helps it stay abreast of the recent malware variants and take preemptive actions. Norton 360 comes with the quarantine feature that protects your system if the malware already found its way inside your system.

Avast gives more importance to managing and recognizing threats inside the system. Avast is heavy on the system as it is constantly observing background scans. Their USP in this category would be the sandbox feature that manages an isolated space where a suspicious app can be run and checked without affecting your system. In terms of testing results. Avast offers a multi-layer technology with a cloud-based operation to render files in a cloud server to check its safety.

As you can see both Avast vs Norton are equally good in this category. No matter which option you choose over another, you won’t regret it.

Scanning means the capability to scan for threats. Both antivirus programs do pretty well in this category.

In our initial testing, we found out that Avast Antivirus performs a scan that is 1.2 times faster than that of Norton 360. But, let’s dive deeper to know in detail about each of these two antivirus programs

With Norton, we see there are different variants of Norton antivirus. There is one entry-level and the advanced Norton 360. Both variants offer a pretty similar kind of scanning experience except the advanced variant offering some premium features.

Now if we look at Avast, we see that Avast brings with it a smart scan feature that efficiently scans all files. Also, we mentioned above that the scanning speed of Avast is more than Norton.

If we analyze overall, we feel that Norton focuses more on threats that are prone to attack. Whereas, Avast approaches threats as soon as they are traced in our system.

So basically Norton here takes the crown as it is terminating the issue even before it develops without waiting for it to enter the system first.

Norton provides the Norton Secure VPN that takes care of your privacy and security online. Your personal info, as well as online activities, are protected with this extra layer of safety offered by this VPN.

Avast on the other hand gives you Secureline VPN, Anti-Track, Secure Browser, Breach Guard, etc. All of these options are there to secure your online presence. Avast also comes with this Sandbox option that protects your system from being vulnerable to downloaded items that are suspicious.

So it is a draw in this category as both the antivirus have for you a strong internet security profile. Be it Norton vs Avast, you will not regret preferring any of these two.

While Norton 360 standard is more about making sure the traffic in your system is well handled. Avast has its forte in providing customization features in its firewall application. Norton 360 has its firewall system called the Intrusion Prevention System that manages the content of your traffic. It also makes sure that no compromising factor gets the access.

Avast offers its users plenty of customization options to personalize the application according to their needs. Though, Avast’s firewall is not that capable as Norton is.

Avast is good for high-end PCs which run on powerful processors. Avast constantly scans in the background to monitor any traces of threats. This helps in reducing a significant amount of time while performing a full scan as Avast doesn’t rescan the already scanned items. Therefore, Avast is faster compared to Norton to complete its full scan.

Norton 360 is good on even low-end PCs. Norton doesn’t consume so much processing power, resulting in less impact on your PC’s overall performance, except for cases when you perform a full scan.

This round tells us that despite those little hiccups, both Norton vs Avast antiviruses are good for our PC.

Both Norton and Avast come with a very easy-to-use, simple appearance when you open their apps. Both the apps show you your present PC vulnerability status with proper color coding. A green check sign on both of them confirms PC’s good health in terms of its safety and security. On occasions when the system is somehow compromised or having any issues, the same green check sign turns into a red alert warning sign, prompting users to take necessary actions to resolve the issue.

Norton shows all important features and tools right below the check sign. Avast displays the onboard features and options on the left sidebar of the home page.

So, both Norton vs Avast stood beside each other as far as UI is concerned.

Norton has applications in Windows, Mac, iOS, and Android devices. We see Avast too run well in Windows, Mac, Android, and iOS devices. So it seems both the antiviruses can reach users regardless of which platform they are using.

Customer support is a key category that users often miss but come back to check at the time of any trouble.

Avast in this aspect shows up with a tricky option where users need to pay additional bucks to enjoy remote phone support. Besides this, Avast tells users to fill forms and help themselves with the help of the FAQ listed on the site.

So, Norton is ahead in this aspect for its wide range of free options for users to avail themselves of support.

Now we will see all the bonus features that come with this two antivirus software.

Norton offers plenty of tools like Webcam security which clearly explains what it does. It detects all spyware and ransomware that attempt to access our webcams and keep them at bay. Thus Norton protects our webcams from all possible intrusions.

Norton also comes with a Cloud Backup facility. Right from 2GB to 100GB of storage based on the plan you are using. Moreover, it has a password manager that helps users not only set strong passwords but also save them.

Coming to Avast, it provides additional options for Safe Banking, Tracker Blocker, Secure browser. Safe Banking protects your input of passwords, pins, Ids, etc. It also scans beforehand the websites we are visiting to guide us the right way.

Tracker Blocker keeps all kinds of trackers in check. It stops them from compromising our identity and personal information.

Avast helps its users to stay away from all intruding advertisements, distracting pop-ups, frequent redirects, and any other malicious tools by introducing the secure browser option, that can be utilized when users need them.

Avast comes with a free version whereas Norton doesn’t. Although Norton provides a free trial period with a window of 7 days. You can have a glimpse of its features and decide. Avast on the other hand offers a complete set of freeware that can be defined as its free version. It means you can use this free version of Avast forever.

Now, coming to the paid versions. For Avast the pricing starts from $34.99 per year and for the same plan, it starts from $29.99 per year for Norton. So, overall the deal of Norton seems more economical for us.

Avast Vs Norton: The Bottom Line

We have thoroughly illustrated all features and how each of the two antivirus software performs in each category. We must say that the competition between Norton vs Avast is pretty close. It requires careful consideration before making your decision to buy one if you are stuck between these two. We would advise you to go through your top-priority category in this article to find out who can fit your requirements. For all others, we can say that no matter which of these two you choose, you will be a gainer but as always the faith of your last leap hangs in that one feature that is most important to you.