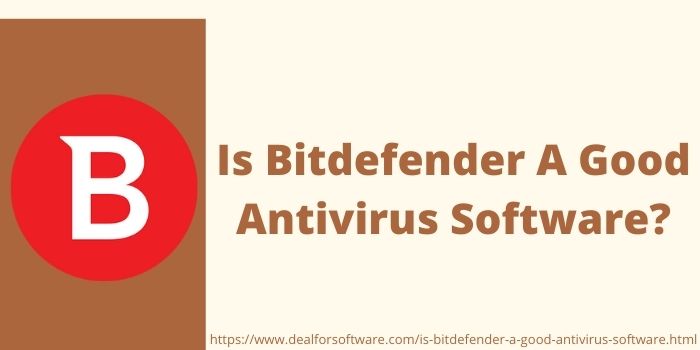 Bitdefender is one of the most famous names in the antivirus industry and serving its service for a very long time. But is Bitdefender a good antivirus software?

The question of safety arises when you have to risk your important data. Through this Bitdefender review, we will find whether is it safe or not?

Bitdefender was founded on November 6, 2001, 19 years ago. It was launched by Florin Talpes. The company is headquartered in Bucharest, Romania.

This antivirus software is compatible with all windows operating systems and Mac. Moreover, this software can run on 5 devices simultaneously.

Is Bitdefender A Good Antivirus Software?

The task of protecting your PC and other devices from the wrath of external harms such as Trojans, viruses, malware, etc. has been made easier with the help of Bitdefender. It is an amazing software that is proven to give the best results in detecting malware on your computer and removing it.

It is a great name that comes with a large number of plans and packages to give you complete PC solutions for online as well as offline safety of the PC.

Bitdefender comes with a variety of products today, such as its Total security package, Bitdefender VPN, Bitdefender Digital Identity protection, etc., but still, the most traditional and popular of its products is the anti-virus protection software provided by Bitdefender.

It comes with firewall protection as well. It is compatible with Windows, Android, Mac OS, and iOS. The cost of Bitdefender anti-virus software starts from Rs. 1619 approx. for a year.

What Are The Features Provided By Bitdefender Antivirus Software?

Now we will read about the tasks that Bitdefender accomplishes for your computer.

The anti-virus software provided by Bitdefender is not at all bulky and provides its users the facility to run deep as well as quick scans. These scans help you detect any kind of malware present on your PC in any form, and thus you can consequently remove it from your system.

With the help of Bitdefender, you need not do anything except giving your permission, and the other sets of tasks will be carried out by Bitdefender itself.

Types of scans that Bitdefender anti-virus runs are:

This is a web protection technology of Bitdefender, that blocks any site that you are surfing over the internet if it turns out to be blacklisted.

Its anti-phishing technology works on all browsers and sometimes is more effective than the browser’s protection itself. It also protects you from websites, that may transfer malware into your PC in the form of downloads.

The unwanted files that fill up the space on your PC can also be removed with the help of Bitdefender.

These files may be the result of downloads from the internet or some software installation that might bring unnecessary files with it.

These files may be corrupt or might pose danger to your PC. Bitdefender removes many types of unwanted files from your PC such as

Bitdefender comes with a facility that provides you protection in real-time. For example, if you are accessing some application or file and Bitdefender finds it to be defective or corrupt, it will detect it and try to give a solution for the same. Some of the potential threats that it detects are-

Final Verdict For Is Bitdefender A Good Antivirus Software?

Thus, we can see that Bitdefender is a really good software for the protection of your PC from its most dreadful enemy- viruses.

Although, there are still some lacking requirements in the system tuneup tool of Bitdefender, which if improved, can make Bitdefender a better option. Yet overall, it is great anti-virus software, with many other features that can provide you complete PC solutions.