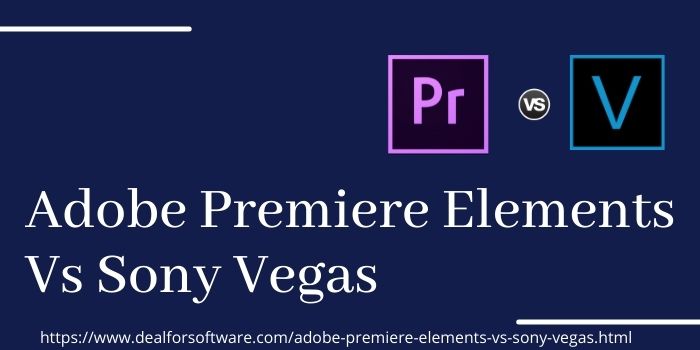 Sony Vegas and Adobe premiere are some of the best video editing software. Both the software Adobe premiere elements and sony vegas come with amazing advanced features.

As both the software considered as two of the best software it is difficult to choose one. Through this Sony Vegas Vs Adobe premiere elements comparison you will be able to take the right conclusion.

What Is Sony Vegas?

It is one-of-a-kind video editing software that was earlier called Magix Vegas and was later acquired by Sony. It comes with powerful tools and features that help you edit videos to create dynamic versions of them. The latest version, Vegas Pro is an amazing pack of features that video editors may drool upon.

It is a widely used software for content creators and can be later uploaded on various platforms such as YouTube in the form of videos, tutorials, illustrations, gaming videos, product reviews, or any other purpose. The main features of Vegas Pro are given below.

What Is Adobe Premiere element?

Adobe premiere elements are one of the most widely used software due to its ease of accessibility as well as the name of Adobe connected with it. It comes with intelligent editing features and helps you create videos with no flaws. There is no limit to your imagination and content creation while using Adobe Premiere.

You can easily create amazing professional as well as basic videos with it with the help of its organized tools as well as a step-by-step guide. You can also share your videos on various platforms. The main features of Adobe Premiere are mentioned below.

To come out to a conclusion regarding which is the better option, we will now make a comparison regarding the basic features of both the software.

Now let’s compare both of the software based on some very important aspects. Lets’s dive into:

Adobe premiere elements on the other hand come with a one-time subscription fee of $99.99. But there’s a catch in it. Every year, it requires an upgrade which costs $79.99 to the customer.

Sony Vegas is a product that can work only on Windows Operating systems. It does not have versions for mobile systems as well as Mac OS.

Adobe premiere on the other hand comes with compatibility in Windows OS as well as Mac OS. Yet, it also lacks compatibility with androids or iPhones, or iPads.

Adobe premiere is a good software for long-term use because of its workflow efficiency and recently added functionality, which is also added by its compatibility with a large number of media formats. Vegas is easy to learn in the beginning but is not so efficient for performing complex and professional activities.

The features such as effect modules which are quite likable by the professionals are more advanced in Adobe Premiere pro. Thus, it is widely preferred by professionals all over the world. Yet some newbies can also get handy to it.

Sony Vegas on the other hand is a much easier program than adobe premiere and so is more preferred by beginners. However, it comprises all the features that are necessary for the usage by professionals as well.

Who Has Better Tools And Features Sony Vegas And Adobe Premiere Elements?

In terms of tools and features, Adobe premiere is a bit ahead of Sony Vegas pro, as it lacks Animation tools and Video transitions, which adobe premiere has on board.

Another feature that is missing in Sony Vegas but is present in Adobe premiere is the 3D editing feature.

Almost all the other features such as HD support, Chroma screen, Colour correction, subtitles, etc. are the same in both these applications.

Therefore, we have read about the amazing features provided by both Sony Vegas as well as Premiere pro.

their price and usability also differ. Based on your requirements, you can thus easily choose the better option for yourself.