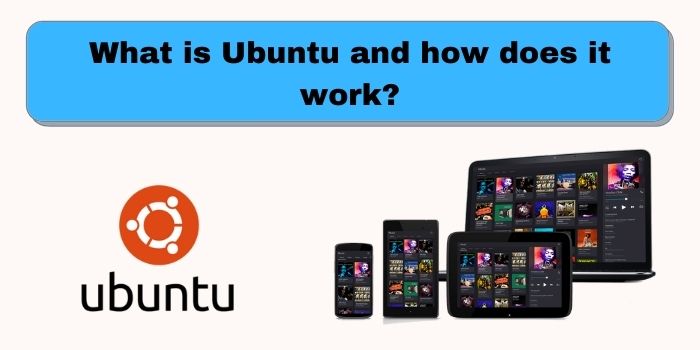 Ubuntu is a recently growing operating system that is mainly based on Linux. But here, the question is what is ubuntu and how does it work and perform its function. So here in this article, we will discuss Ubuntu, its features, and its function in a detailed manner. Every computer is defined by its Operating System. Its external features do not matter as much as its internal ones do. In this regard, the operating system is regarded as the soul of the computer. Ubuntu is one of those Operating systems.

Ubuntu And Its Features

It is a Linux Operating system, which is not as prevalent as Windows or Mac OS today, yet, it has a set of its own features that make it quite likable and handy for many people.  It is free and open-source software, which is available for editing and corrections or improvements that can be made by its users. And you can also know about the pros and cons of Ubuntu, that the user can face on installing this operating system to their device.

Ubuntu has come out in the market in three editions, namely – Desktop, Server, and Core. Ubuntu also has versions for the Internet of Things, such as robots and other virtual machines. It is a very prevalent computing system in terms of Cloud Computing and is famous due to its support for OpenStack.

It comes with its own features that make it a good choice in terms of customer usability and ease of access.

There are the features of using Ubuntu, a Linux-based operating system.

Ubuntu is an operating system that is completely free to use, unlike Windows or Mac OS. Even its higher version “enterprise edition” which is a pack of more exclusive features, is given to all for free.

Ubuntu comes with a large number of languages and translation provisions, which make it an easy-to-use software for a large number of people. Its accessibility infrastructure guarantees easy usage for the customers.

One of the best features of Ubuntu is the regular updates that are provided to the users. Ubuntu updates itself every six months. This increases its potential as all the new features are added and bugs are removed regularly.

The Long Term Support of Ubuntu is also released after every two years, although it is meant to be supported for 5 years. Apart from that, it launches development or non-development LTS releases in between this time period, and they are supported for 9 months each.

This is again an amazing feature of Ubuntu that people can use for free and even edit according to their needs. This means that it is open for anyone to use or edit, and the edits can be further passed on to provide every person with a better experience.

The Ubuntu software can be used on almost every desktop, as well as on online servers. Its compatibility is flexible and easy to maintain regarding the computer or window.

If you are not handy at using a Linus Operating system, you need not worry as Ubuntu comes with support for many software that is used in Windows. Almost every standard application such as word processing and programming language apps and other apps such as browsers and email software etc. can be easily used on Ubuntu. Apart from this, it also has support for many games that can be played on the Desktop.

You can download Ubuntu easily from the internet, through its webpage. Then, you can install it on your computer with the help of a step-by-step guide on the installation process.

After installation, you can easily upgrade to Ubuntu. Every six months a new upgrade comes, and its installation procedure guides you on how to make the upgrades easily.

How does Ubuntu work?

After reading about the features of Ubuntu, you might have come to the conclusion that Ubuntu is not much different from Windows or Mac OS, except in terms of price and popularity. But there is some structural difference between them. This difference can be seen in the work of Ubuntu. But the question arises, “How does Ubuntu work?”

The first step before starting to Work on Ubuntu is getting yourself a computer that is compatible with Ubuntu. There are very few computers on which Ubuntu can work, because of its lesser popularity. Although, if you do not wish to buy such a computer, you can use Ubuntu on your existing computer, along with pre-installed Windows on your PC, with the help of a USB stick.

A private company in the name of Canonical does the task of managing and funding Ubuntu. It provides support to the companies that use Ubuntu in exchange for a fee. It does work regarding Ubuntu, such as – Launching new versions bi-yearly, coordinating Security, and hosting Ubuntu’s online servers for its forums.

Ubuntu uses the GNOME desktop environment for free and Open-source operating systems. GNOME comes with a quite easy user interface and has some elements in common with Windows OS. Its elements that are available on the screen include the following-

There are millions of operating systems available in the market with some affordable and some are little expensive. Out of this, an Operating system named Ubuntu, which is also quite impressive in its initial years. So it is necessary to know about Ubuntu and its work and also some features. Its features consist of free use, wide space, Regular Updates, Open-source Software, Compatibility, Software, and Support. It is almost good in all fields and aspects.

Following are some queries related to Ubuntu and its Function.

What Is Ubuntu Used For?

Ubuntu comes with pre-installed all essential applications which are used to run a school, organization, and business-like office suite, browsers, emails, and media apps. There are also millions of games and apps available in Ubuntu.

Is Ubuntu A Good Operating System?

Yes, Ubuntu is also a good Linux-based operating system. But it is quite difficult to use in comparison to Windows and PCs.

What Are The Features Of Ubuntu?

The features of Ubuntu are it is Free to use, has a Wide scope, gets regular updates, has open-source software, has ease compatibility, smart software, and has good support.