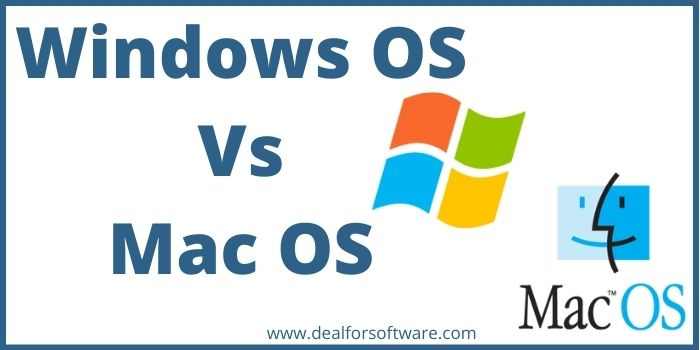 A PC refers to a computer that runs on the operating system. It is also defined as an IBM-compatible computer in simple words, its architecture is based on an IBM microprocessor. A number of different operating systems are compatible with PCs. The most popular operating system is Microsoft Windows. Some others are UNIX, such as Linux, FreeBSD, and Solaris. On the other side the Macintosh normally known as MAC. It is a brand name that covers several lines of personal computers designed, developed, and marketed by Apple Inc. the Mac is the only computer in the world that can run all the major operating systems, including Mac OS X, Windows XP, and Vista. So, here you can see the best operating system for your own computer. We list all the differences between Windows OS Vs Mac OS and after that, you can choose which one is the best for you.

Here we discuss some differences between Windows OS and Mac OS.

You can get clear and polished setup processes in both OS. You can use both without signing in to an account with Apple and Microsoft. You can also get a richer experience to do. You will miss out on syncing machines, voice assistants, app roaming, message, and a lot of other services by not signing up. Microsoft lets you install the OS with your voice using Cortana. Apple installs updates through the system preferences. Both automatically recognize and install drivers for standard hardware factors such as a keyboard, mouse, and storage.

Logging in and getting started

Both systems are offer login options for signing in on your desktop. If you have MacBook Pro with a touch bar then you can easily sign in to your Mac using your fingerprint, you can log in with your iPhone or Apply watch within the range. Windows offers Hello with many biometric login options. Face login is also available on most high-end PCs, including surface devices. Windows Hello also supports fingerprint options and many more options. If you don’t have hardware that’s compatible with these features then you can sign in using the PIN. After you sign up, Windows has the start button and menu to access your most-used apps, documents, and settings. This feature is not offering in Mac but you can pin frequently used apps to your Dock.

Apps included in both

You can get a wealth of built-in utilities and apps in both operating systems. You get decent mail centers, calendars, calculators, photos, and video viewer and editor, screenshots tools, voice recorders, and web browsers, and apps for maps, cameras, news, weather, and contacts. Microsoft gives nifty sticky notes, Skype, translator, and Xbox gaming apps. But macOS offering a superior video editor, a streaming music service, and a preview utility. It also gives the amazing Garageband music composition app and a full productivity suite.

The search box in Windows displays all times and typing in it pops up the panel with file, web results, and apps. On the other hand, you will get the Apple Spotlight feature that works as same as the search box in Windows. Both the search features are done very good work and show weather, stock prices, and sports results. You can search with your voice in both of the searching facilities, with Cortana on Windows and Siri on macOS. So, if you want to search any query with your voice with Cortana or Siri then you can.

Windows includes at least two apps that help you in using 3D and VR. The 3D viewer app will help you in viewing 3D models in a pair of goggles or on screen. Windows Mixed Reality Viewer app works with VR headsets exclusively, giving you a virtual portal to VR apps. HT Vive and Oculus Rift are the two most popular VR headsets that only work with Windows. HoloLens is the device that runs Windows 10 which is all about augmented reality. Apple has made some progress towards VR support. The Final Cut Pro X gives you a very huge platform to edit 360-degree video content with external enclosures for graphics cards that are VR capable. So, you can get very genuine VR and 3D support in both.